I am a huge fan of street food. Not only is it cheap, but I have, in my vast (not) experience, found that street food is, in many cases tastier than your run-o-the-mill restaurant food. India, as I’m sure many people know, is famed for its street food, especially its chaat. And while Patiala, the city I currently reside in, is not known for its chaat, it does have this phenomenal pav bhaji place.

Nestled underneath a flyover, near the railway crossing, in the tiniest of streets, is Bombay Pav Bhaji. Surrounded by bigger shops, mostly selling electronics and sweets, it is easy to miss this place if you aren’t familiar with the area. But if you are familiar with it, you begin to miss it too, but differently, in your heart, when you’re eating something else. Then you suddenly remember the warm bread, and the dollops of butter, and thus begins your craving, one that can only be satiated by playing a visit to this tiny establishment.

Pav bhaji is basically bread with a spicy vegetable curry. But, oh, it is so much more! The bread has to be roasted to perfection, slathered with butter. The bhaji has to be spicy; it generally consists of a mixture of potatoes, onions, and tomatoes cooked in spices like turmeric and garam masala, finished with a dollop of butter. It is traditionally served with a side of raw chopped onions and a wedge of lemon. It is an amalgamation of different flavours and spices. As a fan of this delicious, yet simple dish, my quest of finding the perfect pav bhaji has ended. At least for now.

Priced at merely 30 rupees a plate (they charge extra for extra pav), Bombay pav bhaji serves up its version of this classic Indian dish with a little extra spice between the buns. And the butter, oh, the butter! They should be charging 30 rupees for the amount of butter that we consume in one serving of this dish. The pav is bathed in it, and the bhaji is swimming it it. Suffice to say, I’m probably obsessed with this place. The pav, the bun is roasted in melted butter and stuffed with some amazing mixture of spices (a trade secret?). The bhaji is then cooked, and ladled onto plates; I can’t really explain the preparation of pav bhaji. It is a spectacle in itself, and viewing this only adds to the charm of the dish. 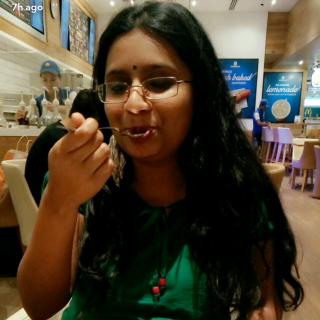